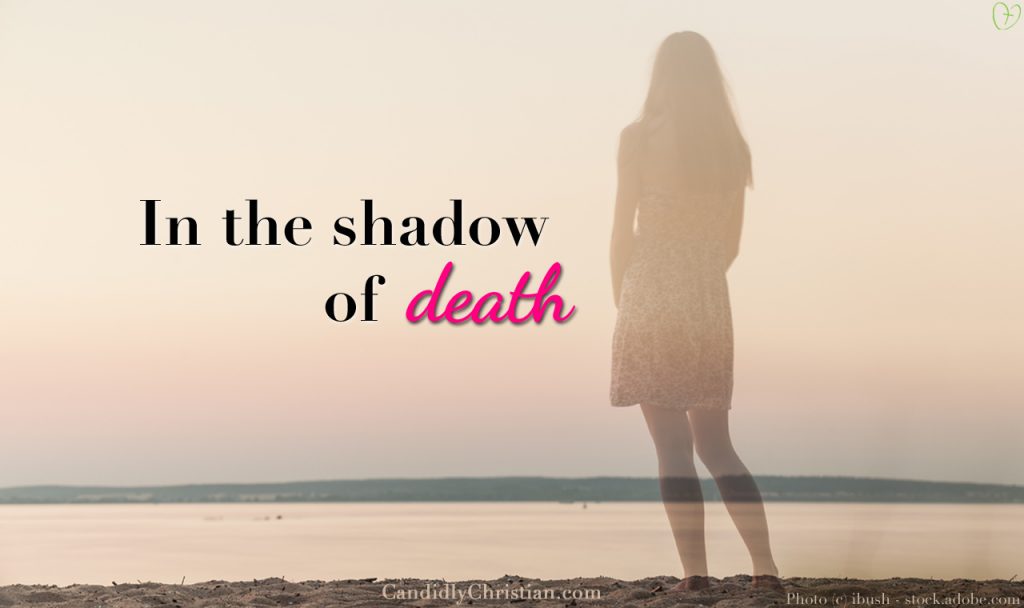 The last time I wrote I’d blogged about having children, and I’d wanted to share more about how God had brought me and my family through the valley of the shadow of death. But something worse than a shadow turned up in our lives.

About three months ago a tragedy hit our family. A sudden death.

I’ve always found deaths so difficult to deal with, but when it happens so suddenly the question that keeps coming up is, “how can this be?” A healthy, relatively young adult, just dropping dead, just like that?

Needless to say this tragedy has been devastating. Especially since this is my sister’s husband. A doctor, age fifty, and, in what most people would have thought, in good health.

It happened in the morning 3 months ago. He’d just sent my niece to her first day at work—she’s a nurse. It was her orientation day. The man had just taken a selfie with his excited daughter, dropped her off, parked the car and walked across a park to his clinic. Except he never made it to his place of work.

Sadder still was that my sister was at the hospital (she’s a nurse there) and bumped into the policeman bringing her the news of the tragedy. I can’t even begin to imagine how my sister must have felt. Or how she made it through that day.

Death is a terrible thing. True it is part of life… but not really.

Because of what happened I went to the book of Genesis and looked through the story of Adam and Eve at the garden before the Fall. I wanted to reconcile this painful moment that had happened to my brother-in-law with what the Bible had to say about death. And there I saw that death was never meant to be when God created the world.

Yet for my sister and her family (and ours, too) here it is. As large as life—pardon the pun.

So where am I going with this?

I detest death—for almost all life—except for roaches and ants. (I have to fess up that I’ve murdered some of these.)

But human death is tragic. God created life in the garden. He considered each day he’d created as “good.” But death came in the form of the serpent. Satan. Jesus himself called Satan a thief: “The thief comes only to steal and kill and destroy.” John 10:10 (NIV). In fact I did some research and found that the Bible mentions Satan as a destroyer 56 times.

Which brings me to my main realization. That as a believer in Jesus, a born-again, Bible-believing (is there any other) Christian who holds the Word of God in utter respect, reverence and regard, I can face death with courage. With a surety that Christians do not die. Cannot die.

“This is the bread which comes down out of heaven, so that one may eat of it and not die.”

This is the hope I cling on to for my children, my husband…that death will not separate us from each other. Not for long, not forever. Because we shall not die but sleep and pass into eternal life.

“Truly, truly, I say to you, if anyone keeps My word he will never see death.”

The greatest pain I feel for my sister is that her husband, as far as I know, have never accepted Christ as his Savior. My sister too has never confessed with her lips that Jesus is Lord, and believe in her heart that God raised Him from the dead. And therein lies the greatest tragedy of all.

For my brother-in-law it may be too late. (The Bible does say that some are snatched from the gates of hell. This could include him. I hope. I pray. ) But his death reminds me of how fleeting life is. Here today, gone tomorrow. And for some gone forever.

Ever since the day I received this terrible news—they live in New Zealand—I tell myself I will appreciate my family more–my husband, my children. Spend more time with them. Converse more. Gripe less, complain less, and be thankful more. That I have them. Still. And they have Jesus… I pray.

Because life is fleeting and eternity is a long time. Too long to risk a forever future.

The Lord keep you safe and well, my friend.

Emma Right is an award-winning and Amazon best-selling author of several children and young adult novels. She believes that all children can reach and excel their God-given potential, and she has a passion to equip children for Christ. As an avid reader she consumes at least one novel a week if not more. However, she finds many of the books these days unsuitable for young people and believes fiction that’s fun to read and with a powerful message can still be wholesome. Once upon a time she was a copywriter for two major advertising agencies and won several awards, including the prestigious Clio Award.