Seriously, I Don’t Need A Miracle, I Just Need Jesus

I have been suffering these migraines for over six months now. It’s rough to say the least. There are days when I can barely get out of bed. I know my children are feeling the strain. They are worried about their mom.

Over the last six months I have gotten a ton of advice. From getting an ear piercing to a hysterectomy, from which vitamins will help the most to which prescription drugs are the best, I am pretty sure I have heard it all (but don’t feel like you need to test that theory). The latest advice was more of a command though. I was told that I needed to go to a healing ministry for a miracle.

Life is hard, but I don’t need a miracle, I just need Jesus…

Now, don’t get me wrong, I believe in miracles. I believe that my God can do anything. He is God.

And a miracle would be nice. I would love for my migraines to just disappear, and I know that God could do that. In fact, more than one person has laid hands on my head and prayed for my healing, believing in faith that I would be healed. But that hasn’t been God’s will. I don’t believe going to a healing ministry will change that.

The fact of the matter is, while there are numerous people in the Bible who were miraculously healed, not everyone was or is.

When Push Comes To Shove, I Don’t Need A Miracle, I Just Need Jesus

I have been thinking about Paul a lot lately, with his thorn in the flesh. He prayed three times for it to be taken away, yet it remained. “A messenger of Satan to harass him” (2 Corinthians 12:7).

Paul didn’t throw in the towel and give up because he wasn’t healed. He didn’t go camp out by a healing pool. God said to him, “My grace is sufficient for you, for my power is made perfect in weakness.” (vs 9) And Paul took Him at His Word. He ran with that and kept going. 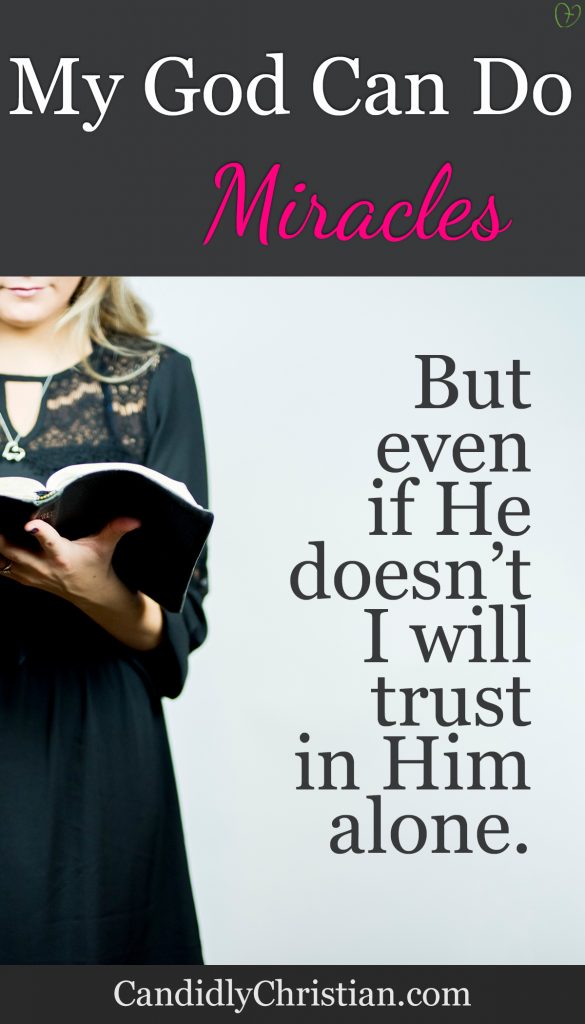 Another Bible passage that I fall back on a lot is the one about Shadrach, Meshach, and Abednego (Daniel 3). When they went into the fiery furnace they told King Nebuchadnezzar that their God was able to rescue them, but even if He didn’t they would still serve Him, and Him alone. That’s where I am.

I know God could heal me, but even if He doesn’t, He is still the king of my heart and I will keep my eyes fixed on Him.

The Miracle That Never Came
…& Those That Did

This isn’t something new to me, by the way. I was born with cancer and lost my right eye when I was just a year old. I have essentially lived my entire life with a prosthetic.

Growing up I used to beg God to restore my eye and make me normal. I would cry out to Him from the depths of my soul knowing He could do it and go to bed full of faith that I would wake up miraculously healed. Only to wake up just the same as I went to bed. It would break my little girl heart. But not my faith.

You see, if I needed specific miracles to believe in Jesus, I would have lost faith in Him a long time ago.

I have seen miracles in my lifetime though; experienced them. I know they are real. But I also know God isn’t a genie in a bottle who heals at our beck and call.

Just as Paul, Shadrach, Meshach, and Abednego all said, even though God is powerful enough to perform miracles, our faith isn’t dependent on them. Or at least it shouldn’t be.

One thing I was thinking about this morning was Moses. When God spoke to him out of the burning bush, one of Moses’ complaints was that he was slow of speech and tongue (Exodus 4:10). God didn’t immediately jump in and heal him. Granted, Moses didn’t ask for healing (or at least it wasn’t recorded that he did). God uses imperfect people. Whether we are imperfect because of the sins of our pasts (because we all have something), or because of something we are currently going through (because there is always something), God never promised us a perfect life.

In John 16:33 Jesus said, “I have said these things to you, that in me you may have peace. In the world you will have tribulation. But take heart; I have overcome the world.”

Our God is powerful enough to perform miracles, but our faith shouldn’t be dependent on them…

Life is Hard, but God is Good

Sometimes God gives us miracles, sometimes He doesn’t. That’s just the way that it is. And I’m okay with that.

Has God ever worked a miracle in your life? Or have you ever had to surrender your faith to Him with no healing strings attached? I’d love to hear from you in the comments below.

God may not have healed me, but He has still blessed me beyond measure. Over the past six months I have experienced God’s love in a whole new way and I wouldn’t trade it for the world. Sometimes, God uses painful experiences to bless us. In fact, Sherry is going to share her own story about that on Monday so make sure you stop back in. (Click here to read her story and how it relates to God’s grace.)

P.S. I am using the featured image from this post as the wallpaper on my computer and for my Facebook cover photo, and you can, too. Download it free when you sign up for our weekly newsletter here. 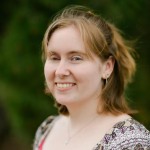 What To Do With The Things That Make You Ask “Why God?”

When Sharing Your Testimony Leaves You Feeling Exposed…

What the Little Drummer Boy Teaches Us About Christmas

By the time you read this post, I expect you may be stretched out on a recliner, sipping the last...