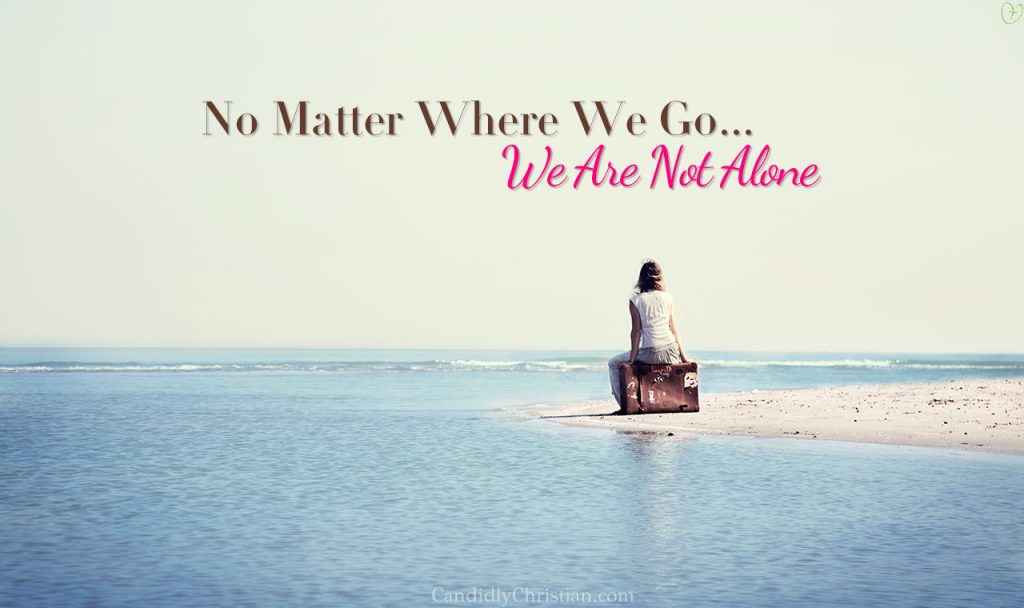 When we say we’re going to be stuck somewhere, afraid that there will be no one else around to help, God says, “No one but Me.”

When we feel abandoned and desperate, God says, “I will never leave you nor forsake you.”

Feelings aren’t the arbiter of truth, and isn’t that a wonderful thing to realize? But God doesn’t dismiss our feelings either.

When we feel alone, God doesn’t tell us not to feel that way. He tells us we’re not alone. He shows us the Truth.

When we feel rejected, God doesn’t necessarily tell us to find better friends or place the blame on our own behavior. God instead assures us that He’ll never leave us behind.

God shows us the Truth, then holds our hand and leads us down that path.

God may be moving us to do something that seems scary, like stepping out onto a ledge with no support system underneath. Imagine walking up to the edge of a boat and considering stepping out onto the water with nothing there but sea. Not walking a plank. Not jumping into a lifeboat. Stepping out onto air and thinking that God will hold you up.

But Peter literally did that. And Jesus literally held him up when he began to sink.

So no matter where I’m heading next, physically, mentally, in my career, in my relationships, as long as God is the One holding my hand, nothing can sink me. Him holding my hand is the ultimate support. It’s the only way not to be overwhelmed.

I’ve been feeling overwhelmed myself a lot lately. We’re in the process of moving, while also clearing out the accumulation of over 70 years from an elderly relative who lived here too. It’s daunting, and I’m afraid I’m going to leave something essential behind.

In truth, the only thing that matters are the living beings in our care. Those are what we can’t leave behind.

Perhaps it’s also that I’ll be leaving behind people I’ve built relationships with for over ten years, people who have become valued friends and confidants. People who understand my foibles and quirks and still speak to me despite them.

It can be scary, but I do know God is not standing back and watching me flounder. He’s holding my hand and walking along with me.

God Is Still Good & I Am Not Facing This Alone

This year I’m in a group that’s reading the Bible chronologically and we’re in the time when Israel was wandering in the wilderness for 40 years.

God had told them they would have to wander as a punishment for not believing His promise to help them conquer the land… but you know, God didn’t leave them alone to wander in isolation. He still directed each of their paths. God still led them with a pillar of cloud by day and a pillar of smoke by night. He still rained down manna and quail for their food; still kept their shoes from wearing out and their clothes from getting ragged.

God told them when to camp and when to travel. He told them who to fight and who to avoid. God gave them villages they could inhabit at times and led them precisely in the way they should go.

While they were essentially in exile.

God didn’t abandon them – ever.

God won’t abandon me – ever.

And God won’t abandon you – ever.

Do you ever feel like God has left you to wander alone? What do you do when those feelings become overwhelming?