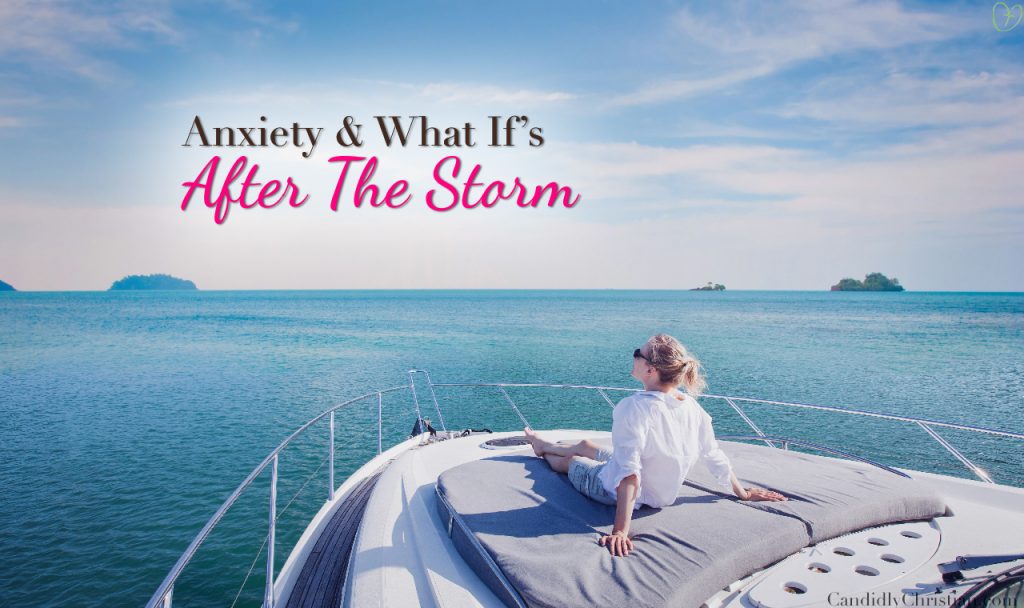 It was a beautiful summer day. Weather reports said there was a chance of a severe thunderstorm, but we took our chances and went on my parent’s boat with the kids. Like usual we went to the island so the kids could play in the sand, but when we got there, there were nasty looking clouds coming at us.

We watched to see if the storm was coming directly at us, and we began to see bolts of lightning light up the clouds. Plain and simple. We waited too long to leave the island.

As quickly as we jumped on the boat (not so quickly with two kids, and me who was trying to convince a woman on the island to come with us because she was alone) was as quickly as the storm charged at us.

We were okay until we got into the harbor, and then it was like hell broke loose as the wind threw hail at us, waves were coming over the side of the boat, and we saw a wall of rain right ahead. My husband was helping my dad, my mom was trying to comfort Charlie who was shaking in fear, and the woman that we took in from the island and I were holding Olivia as she clung to her sopping wet blanket.

My dad didn’t think we would make it if we kept going into the storm. The waves were too much for our little boat, so he turned around, rode with the storm back to the island. We beached the boat and waited for the storm to end.

Eventually, the storm ended. The sun was out within minutes once it was over. And 5 minutes later Olivia was sleeping in my arms, and Charlie was playing on the beach until we were able to get off the island.

Anxiety and The “What If’s”

As you can imagine my son was a bit hesitant to go back on the boat, but we took him again and it was a wonderful day. Afterward, I said to him “See? You don’t have it be afraid.” But what he said next was a reflection of my own thoughts. “What if another storm comes?”

See, I was not afraid during the storm. Honestly, there wasn’t really time for fear. But the day after the storm was a different story. It was a week that was going to hold transition, but it also held anxiety that I haven’t felt in a long time. There was one afternoon I just sat and cried.

I had anxiety about anything and everything. The “what if’s” were my storm. This Fall will hold a lot of transition for us all, so many of my thoughts revolved around that. Charlie will begin Kindergarten. Olivia will begin pre-school. Everything thing I had anxiety about are things that have been prayed about, but as this week of transition followed the week of the storm, my thoughts were consumed with questions like, what if Charlie doesn’t transition well into camp? What if he doesn’t like his teachers? Maybe we made the wrong decision taking him out of school and putting him into camp since he will be transitioning to a new school in just a few weeks?

And then my thoughts went to Olivia. Who will protect her in pre-school? She isn’t used to people being mean to her, what if someone pushes her, and I am not there to comfort her? What if we made the wrong decision putting her in school 5 days a week? What if she loses her sweetness because of mean kids?

Can anyone relate? What is your storm right now?

3 Things To Remember In The Storm

Here are a few things that I have been remembering through this time:

1.) Jesus will call out our lack of faith before calming the storm.

Matthew 8:24 says this “Suddenly a furious storm came up on the lake, so that the waves swept over the boat. But Jesus was sleeping.” The disciples went and woke Him up telling Him to save them because they were going to drown. Interesting enough, Jesus doesn’t calm the storm immediately. He first calls out their lack of faith. “You of little faith, why are you so afraid?” It was then He rebuked the winds and the sea, and then it was perfectly calm.

The disciples came to him in fear, instead of in faith. And honestly, I am kind of currently approaching life like that, because my “what if’s” aren’t thoughts that are faith-filled. Here is the truth plain and simple. If God is for you, then you don’t have to approach Him in fear, when you can come to Him in faith.

2.) Just because Jesus was sleeping doesn’t mean that He wasn’t there.

Are you asking Jesus where He is? Do you feel like He is asleep? One thing that I was reminded of when I was trying to encourage the woman to come with us, is that He will never leave us alone. I couldn’t fathom leaving her alone in the storm, because if God wouldn’t leave us alone in the storm, I didn’t want to leave her alone either. And that is His promise to us. It is not a hope or a wish. But a promise. It is truth. He will never leave us. He may be silent, it may be hard to see Him in the wind and the waves, but He is always there.

3.) Jesus may call you to walk through the wind and the waves before He calms the storm.

As I said, everything that I had anxiety about were things that I had prayed about. And if I am praying, I need to have confidence in the One that I am praying to, even if I am in the storm. Just like He continually calls out the disciple’s lack of trust, to stretch their faith, He will ask you to trust Him in uncertainties. He will call out your faith, as you are drowning in fear watching the wind and the waves. He will call you to believe in what seems impossible before He calms the storm. And He will be there every step of the way, as you follow where He leads.

Dear friends, I am writing this in the middle of summer. I don’t know what is before us. I am approaching the Fall, just as you are (okay maybe you are approaching it with a lot more faith than I currently am!). But if you are in the middle of a storm, I want you to remember one thing more thing. Storms don’t last forever.

What other things do you remember when you are in the storm?