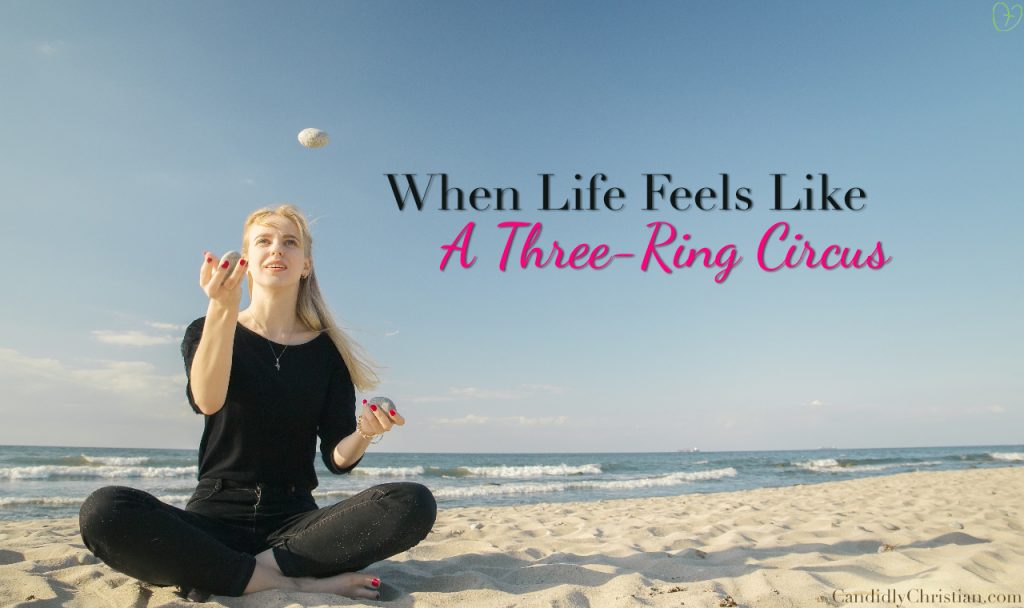 For though a righteous man falls seven times, he rises again, but the wicked are brought down by calamity. -Proverbs 24:16 (NIV)

My life feels like a three-ring circus. This thought crossed my mind today, and not for the first time.

And by a circus, I don’t mean the fun kind – the Barnum and Bailey kind, where lions are tamed and acrobats swing skillfully from one trapeze to the next. I mean the little girl in her backyard pretending she can juggle with fire and ride a unicycle – but the fire is real, and the unicycle is tall and she has no helmet. That kind of circus usually ends up with burns and blood, and a little girl wondering why on earth she thought she could perform like that in the first place.

There might be some people who do a great job of managing chaos in a graceful way, maybe even transforming it into order as they go.

I am not one of those people.

The Chaos of Life

I have seen the summer fly by as always, and feel I have very little to show for it. My home is more out of control than it’s been since I can remember, and as I write this we have a guest coming to stay for a couple of weeks in two days. Two days…

God provided funding for our home foundation repairs from the earthquake last November, and I still can’t get over it (thank you, Lord!), but because of so many people needing work done, our repairs have been delayed until December (over a year later…) and our house continues to settle. There are several repairs that can’t be done until the foundation is fixed, so my home doesn’t feel fully functional.

I feel like no matter how much or how hard I work, I’m barely maintaining food on the table, clean dishes, and clothing. The rest of the time I’m chiseling away at home projects that leave the house looking exactly the same.

I had so many plans for this summer: parenting intentionally, creating great systems for chores for the kids and making time for outdoor activities. Being better about limiting screen time, taking long bike rides and reading together on the hammock in the back yard. Yelling less, being more patient. As I look at the list I feel a sense of regret as I realize I’ve done a poor job at all of those things so far.

So here I sit in my three-ring circus, burned hands (from the juggling), scraped knees and elbows (unicycle) and bruised self-worth. But I’m not writing this post to depress you, or whine and get sympathy. I’m writing because as the thought of the three-ring circus came to mind, so did something else.

Earlier this year the kids and I went to a small circus that came to Anchorage. It wasn’t huge like Barnum’s, but it was fun. They had some amazing performers and it was the first time any of the kids have been to a circus.

Toward the end of the performance, they literally had three rings with different acts going on in each one for the grand finale. One of the performers was balancing on a huge ball while juggling. At one point, he stumbled and recovered. The crowd gasped, and I wondered if it was all part of the act, but then he actually fell off the huge ball and hit his head on the ground. A couple of people ran to him as he held his neck and seemed to be in pain. After about thirty long seconds, he started to get up. He shook his head, jumped to his feet and raised his hands in victory. He picked up the rings he had been juggling, got right back up onto the huge ball and began again.

The crowd went wild, cheering more than they’d done for any other act, my kids included. He finished strong, and the overall effect was that this guy was the star of the show, more so than if he’d have executed his performance flawlessly.

At the end of the circus, I asked each child which part was their favorite. I expected my middle son to choose the motorcycles in the sphere, but he said that the guy juggling on the ball was his favorite.

The Chaos of Life & A Three-Ring Circus

When I thought “my life is like a three-ring circus,” it was as if God gave me the memory of the real-life circus we experienced as a reminder that as long as I keep getting back up, I can be the hero of my own circus. And the failures and flaws and imperfections (and the way I choose to handle them) may actually be the things that God redeems and transforms into the most valuable lessons, the most memorable moments, and the most God-glorifying parts of my family’s life.

The important thing is that when we fall or get into a rut like I’ve been in, we get back up. I have a tendency to get paralyzed by failure (or perceived failure), but we can’t do that. Getting back up isn’t just the right thing to do; it’s our birthright as daughters of the King.

I choose to jump back to my feet today, raising my hands in victory and getting back on the ball. What about you? Do you have examples of times in your life when God has taken a perceived failure and transformed it into victory? Please share your story, we’d love to hear it!

Jaime has a tendency to get paralyzed by failure (or perceived failure)… can you relate? Click To Tweet