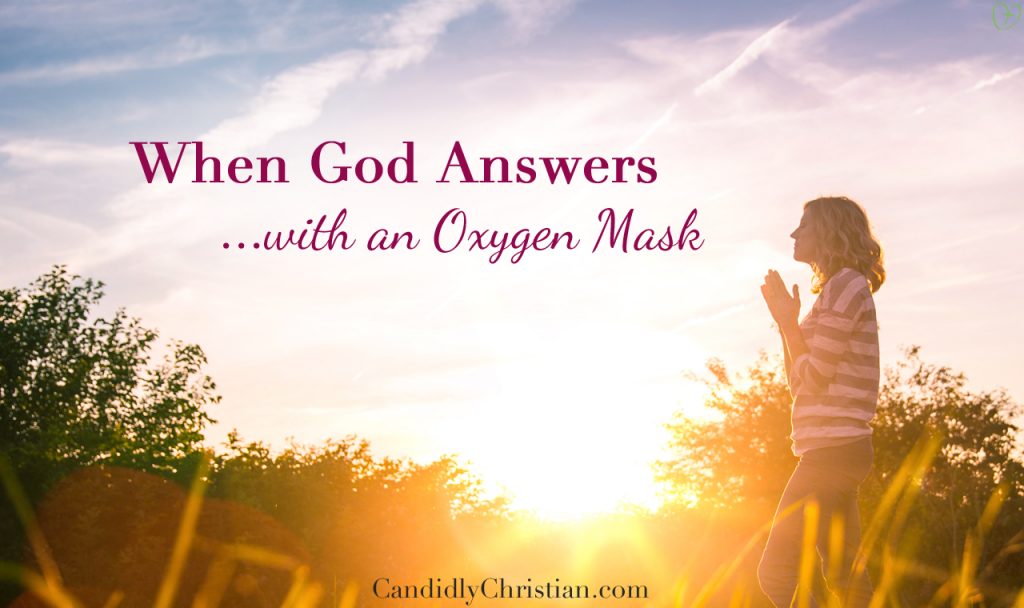 Have you ever wondered why you can see God’s hand in some areas of your life, but not so much in others? Maybe like me, you’ve even asked Him. It’s not that you’re not thankful, you just want to know why.

That was a conversation I had with God a few months ago.

The second half of 2016 was rough. After multiple large, unexpected expenses, loss of my part-time job when my position was eliminated, and ongoing family medical concerns, I was tired. I knew God was walking with me. I’d seen His work along the way. But, still, I was worn out.

As January 2017 began, the one-after-another extra expenses had slowed down. There were still bills to be caught up on, but I began to see some new employment opportunities. I saw God at work in obvious ways in several areas of my life and watching His plan unfold re-energized my hope.

There was still one area, though, where there was no visible change—my loved one’s medical concerns. Every time I tried to move forward to make something happen, I felt like I hit a brick wall. My efforts went nowhere and I wondered if I was supposed to stop trying.

As I showered and dressed one morning, I had one of my heart-to-heart talks with God. I thanked Him for the opportunities He was presenting—I knew without a doubt He was at work. And in the next breath, I asked why. Why was He helping me and not my loved one? Why was I feeling hopeful in one area and hopeless in another?

I knew that He hadn’t chosen sides and that His help wasn’t limited to me, but sometimes what we know and feel don’t work together.

I wanted the hope I was feeling to spread into all areas of my life, but honestly, I felt guilty that my situation was improving when we’d seen no healing in the medical issues that had gone on for so long.

Feeling thankful and frustrated at the same time confused me. How could I be so confident and thankful, while at the same time crying out why? And when? I prayed and cried that morning, not expecting an explanation, but just needing to express my feelings. And yet, He answered—in a way I did not anticipate.

I immediately thought about the oxygen mask instructions given to passengers before a flight takes off. When traveling with a child, the parent is to secure her own oxygen mask first, and then the child’s mask.

Now, you have to understand, there was no logical reason for me to think of this. I haven’t flown in over a decade, and have no vacation plans that involve flying. There was no recent story of a plane crash or emergency landing that I was aware of, and I hadn’t been in, or overheard, any recent conversations involving flights or airlines.

There was no reason for oxygen mask instructions to come to mind… except that I asked God why and He answered.

A mother has to have her own oxygen so that she has the ability and strength to help her child.

His answer that morning wasn’t the miracle healing I begged for. It was an explanation I could understand.

His answer that morning wasn’t the miracle healing I begged for, but was an explanation I could understand. Click To Tweet

Perhaps God was helping me catch my breath first so that I’d be ready for the next part of His plan.

All plans have details to be sorted out, and God’s plans are intricately designed. I don’t know the timing of the details, but He does, and I would have to trust that He was putting things in place for what was to come. If He supplies an oxygen mask, I’d best put it on, even especially when I don’t know what’s coming.

In the meantime, I needed to wait patiently and walk in obedience—one step at a time. God’s plan would unfold in His time. As I saw the doors He was opening, it strengthened my faith that He was with us. Not just me, but my entire family.

Each time I began to panic and worry again about the situation, I reminded myself to follow God’s lead. When the time was right, He would make things happen.

“Do not be afraid or discouraged, for the Lord will personally go ahead of you. He will be with you; he will neither fail you nor abandon you.” Deuteronomy 31:8 NLT

The outcome might not be what I had in mind, and it certainly was long after the time frame I requested, but I had to trust Him. When I pushed to make things happen, it was difficult and didn’t go well, or nothing happened at all. But, when I waited until He nudged me forward, the path He outlined was smoother and easier to travel.

In many ways, I’m still waiting, but being able to look back at the open doors I’ve walked through gives me the ability to keep waiting. It strengthens my faith. And it reinforces my trust in His way over my own.

Are there any areas in your life where you are struggling to see God move? Or has He given you an answer you didn’t expect? We’d love to hear from you in the comments below.

Laura Rath enjoys writing to encourage women in their walk with Christ. She shares stories of her own faith journey on her blog, Journey in Faith, and is a regular contributor for several Christian websites. Laura is a wife and mother and enjoys spending time with her family, reading, going deeply into God’s Word, and speaking at women's events. You can find her on her blog, as well as Twitter and Facebook.